WHY DOES the Australian hospitality industry dislocate Christmas by seven months (rather than six)?

My theory is that they borrowed the idea from the northern hemisphere, where Christmas seems merely silly in hot weather.

Although previously not unknown, the concept was popularised in late 1940 by a light-hearted Hollywood movie, Christmas in July. The main-title shows the letters of “CHRISTMAS” topped in snow, and “JULY” in flames.

So, it’s merely anachronistic fun, available to greeting card and other commercial interests.

The southern hemisphere shifting the seasons six months gets to the core of our being.

Plum pudding “at 100 degrees in the shade” is a recognised absurdity. But a summer Christmas upsets not only the foods. The seasonal mood is all out of joint.

I have already complained about the Australian Christmas as doubly stressful – enforcing happy family gatherings amid obligatory summer fun.

Christmas is actually meant to bring the New Year promise that life might be a downer now, but it will soon re-awaken – the snow melt, and green shoots appear.

The familiar symbolism offers a glimmer of hope. Candles pierce the gloom. Yule-logs promise warmth. Fir trees stand out against the snow. Red baubles provide colour. Even family gatherings might lend some relief.

In An Alphabet for Gourmets (1949), M.F.K. Fisher observed under “F is for family” that “deliberately assembled relatives can be one of the dullest, if not most dangerous, gatherings in the world”. She saw no reason why “a given set of ill-assorted people, for no other reason than because it is Christmas, will be joyful to be reunited and to break bread together”.

Yet even she tried her family best at Christmas.

The depths of winter are so gloomy that the number of suicides might be expected to rise. It is the reverse, however. Records from various times and places show the highest suicide rate in late spring and early summer.

For the countryside, the Winter is a time of rest approaching stagnation. All life seems to stop…. In Spring, however, everything begins to awake; activity is resumed, relations spring up, interchanges increase …

The cities exhibited the same seasonal variation, although the worst of winter was attenuated by the bright lights. In summer, social activity, including suicide, “has more space to operate”. People rub up against one another more, sometimes abrasively, so that violent assaults also increase. And Durkheim concluded

… it is the density of human interactions, and not the environment that caused higher incidence of suicide in Spring or Summer

Depressed people can feel even further out of synch amid the social density and sunnier mood. They can be cast as misfits, not wanting to play beach cricket.

A genuinely wintry Christmas means everyone fears the worst, and might be pleasantly surprised. The darkness gives permission to cheering up.

COLUMNIST Annabel Crabb wrote yesterday about politics here and abroad being like a bad dream. Having called an unusual, winter election, Malcolm Turnbull has only snuck back as Prime Minister, along with racist One Nation. Nonetheless, we in Australia are probably not as dispirited as those in the north, whose summer shines bright with Brexit and Trump. 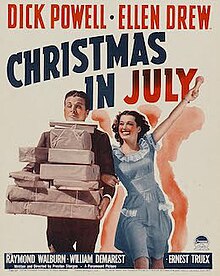 We can take heart that Preston Sturges’ “cunning and carefree” comedy, Christmas in July, was released, in time for winter, just after Franklin D. Roosevelt had easily won a third Presidential term.

As a post-election jog to national sanity, we recommend Christmas in July.

One thought on “Happy Christmas in July!”