(And several research papers should also be reachable here or here.)

A radical restoration of political philosophy and economics, because meals matter. The book shows the shallowness of mainstream economics, and the destructiveness of its invention, “greed is good”.

“Symons succeeds brilliantly in a radical project: convincing readers to rethink a singular ‘economics’ as multiple ‘economies:’ bodily, household, market, political, and natural. His book draws on intellectual history, economic and social theories, and gastronomy, and it is richly illustrated with stories about meals.” Janet Flammang, author of The Taste for Civilization: Food, Politics, and Civil Society

How to purchase here. 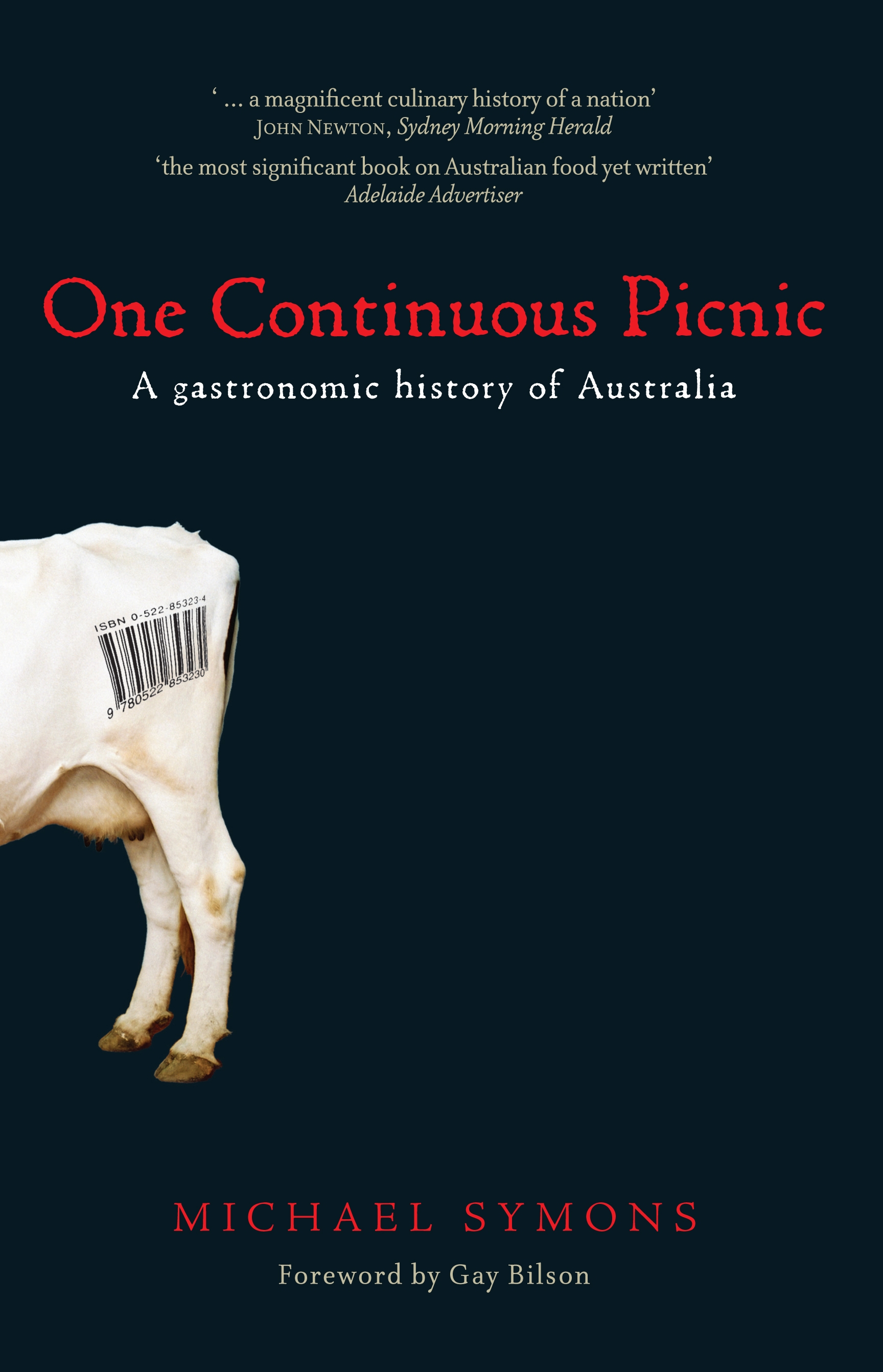 Originally published in 1982, One Continuous Picnic was probably the first consciously gastronomic history of any nation. It took a while, but eventually gained scholarly recognition (along with the acceptance of our own meals as a serious topic), and has for some years been established as an Australian classic. In many ways, a lament about food industrialisation, it points out that Australia was the only continent not to host a traditional, agrarian cuisine  – it was a “history without peasants”. We moderns have been “eating on rather than eating of the earth,” to quote a reader.

Purchase One Continuous Picnic from your favourite bookshop or publisher

This book’s huge ambitions are perhaps best explained by its working-title, Cooks Made Us. Bringing attention to Boswell’s observation of humans as the “cooking animal”, the book rejects the more common, transformational theories of cooking (cooking for reasons of digestibility or expressiveness) in favour of a distributional explanation. That is, cooks share food around, which distribution is the also basis of the division of labour. That makes knives more basic than stoves, for example (and stone-age flints were used much earlier than cooking fires). The second half of the book puts cooks and cooking at the centre of world history, showing political economies to have emerged from vast kitchens – providing the banquets of temple-states, and so on.

Purchase A History of Cooks and Cooking through your favourite bookshop, publisher or mail-order

The Pudding that Took a Thousand Cooks: The story of cooking in civilisation and daily life, Ringwood, Victoria, Australia: Viking, 1998 – republished as A History of Cooks and Cooking

***The Shared Table: Ideas for Australian cuisine, Canberra: AGPS, 1993 (commissioned by the Office of Multicultural Affairs, Department of the Prime Minister and Cabinet)

The Shared Table is stuffed with insights into Australian eating and drinking, including the suggestion that the continent’s climates are far too varied to support any single “Australian cuisine,”  and provide, instead, a geographical guide to culinary suitability: Tropical cuisines, such as Thai, might work well north of Rockhampton, Cantonese influences ought to suit Brisbane and Sydney, French styles have has often seemed more appropriate in Melbourne and Hobart, and Mediterranean more the way to go in Adelaide and Perth. Authenticity is another preoccupation with the suggestion that a restaurant meal might not merely be culturally “correct” (the “real” recipe, for example), but socially (with welcoming hospitality) and naturally (such as fresh, seasonal produce served in a pleasant setting).

“Eating into thinking: Explorations in the sociology of cuisine”, Ph.D. dissertation, Flinders University of South Australia, 1991

Examines tensions between “the high” and “the low” through studies of Plato, Christianity, the increasingly rationalised concept of time, vegetarianism, and nouvelle cuisine, and advocates Brillat-Savarin’s “new science” of gastronomy

One Continuous Picnic: A history of eating in Australia, Ringwood Victoria, Penguin, 1984

One Continuous Picnic: A history of eating in Australia, Adelaide, Duck Press, 1982