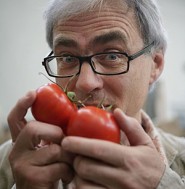 Michael Brooke Symons, B.Sc., Ph.D. (born Adelaide, 1945) is the author of books and research papers on a wide range of meal topics. He has pursued radical gastronomy since 1977. Selected papers listed and often available here or here.

Among other works, One Continuous Picnic is a gastronomic history of Australia (originally 1982, expanded 2007); The Shared Table: Ideas for Australian Cuisine (1993) examines food authenticity and more; and A History of Cooks and Cooking (2000, originally The Pudding that Took a Thousand Cooks, 1998) shows how cooks made civilisation.

Michael Symons started out as an environmental journalist with the Sydney Morning Herald (1967-1973), worked briefly in ABC radio and for Tom Uren in the Whitlam government, joined three other expatriates to open the Cantina di Toia restaurant in Bacchereto (FI) in Tuscany, and then became a partner with Jennifer Hillier in the Uraidla Aristologist restaurant in the Adelaide Hills from 1981 for 15 years.

He instigated the highly influential Symposiums of Australian Gastronomy in 1984, and, in the same year, set out on a PhD with Professors Bryan Turner and Bob Holton at the Flinders University of SA (“Eating into thinking: Explorations in the sociology of cuisine,” awarded 1992). Living in Wellington New Zealand from 2001-2007, he initiated gastronomic symposiums there, joined Helen Leach as a Marsden Fund investigator of cookery books, and became an expert on flat whites.

An advocate of Epicurus and Brillat-Savarin, and convinced of the major insights to be had by gastronomy, he took so long with his gastronomy of economics that it would surely have to be a thorough challenge to orthodoxies.

He married Professor Marion Maddox in 1995, and they are based back in Sydney.

One thought on “Michael Symons”