The past decade has seen the collapse of British restaurants.

They held 10 of the world’s “Best 50” positions in 2005, and now only two. Almost as disastrously, the decline in number of world-beating French restaurants has plummeted from 11 to five. The U.S.A. went from nine to six, Australia from three to one, and Barbados fell from two to none at all.

Where did all that great dining go? Spain has lifted its total from four to seven, Peru and Mexico have come from nowhere to gain three spots each; Brazil, Sweden, Japan, Thailand and China came in with two; and Singapore, Russia, South Africa and Chile snapped up one. The rest of the world stayed roughly where they were.

I’m joking. What has changed is not the quality of the national stars but the scope of the “World’s Best 50 Restaurants”. A British magazine started the annual list in 2002, and still in 2005 found the great places either down the road, or in France, the U.S. and Barbados. Over the years, the judging has expanded further across the globe.

The best in the world, “Says who?” That’s Paul Levy’s comment on the latest list, just announced. “Would any critic dare to try to name the 50 best operas/singers/actors/artists in the world, except as some sort of perverse game?” The original foodie underscores his point with the photograph (above), chosen by the “Best 50” organisers to represent their very “best” restaurant, El Celler de Can Roca in Girona, Spain.

That Paul was not overly selective with the photograph can be confirmed elsewhere. Here’s another I’ve referenced: 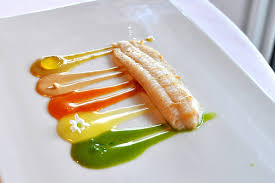 Restaurant magazine had asked Paul to vote in the early years, and he was not surprised that “the initial list in 2002 maintained absurdly that more of the world’s top restaurants were in Britain than in France.”

He admits to have dined at some of latest winners, and that they are “very good indeed”. The problem is that we could both name dozens of equally wonderful meals nowhere near the list. Now shut, Ritual in Nelson Bay, north of Sydney, rightfully gained a devoted following, but regularly lost scores in the local guidebook until it was dropped entirely. I’m looking forward to the emergence of Orana – or is Adelaide going to prove just too far for the globe-trotters?

As a restaurant rating groupie, I can remind Paul that even a half-decent guide is better than no guide. And another consolation is that we are watching the “Best 50’s” self-destruction. I’m not referring to its encouraging of ever-more damaging jet-setting.

Rather, my point is that the near-doubling of the number of countries on the list from 11 in 2005 to 21 is only a beginning. The United Nations has 193 members. The judges don’t appear yet to have brought in Vietnam, India, Pakistan, Iraq, Morocco … Is Canada yet to make the grade? And those other former British colonies, Hong Kong and Barbados, might yet pop back.

Soon, the near-impossibility of comparing of apples with pears will be compounded by the total incredibility of rating them against okra, lentils, cardamom, pomegranates, couscous and, let’s hope one day, Kiwi fruit.

One thought on “The collapse of dining in U.K., U.S.A., France, Australia and Barbados”