Paris secrets, or at least the dining we’ve enjoyed these past five weeks, with the added test of wanting to return.

The plan this time was to concentrate on cheap and near, and I have already reported tagines Chez Hamadi.

Our recently-departed studio in a surprisingly quiet street between St Michel and Odéon-St Germain put us handily a few doors from New Delhi’s takeaway – three men, stove and tandoor jammed in a hole-in-the-wall. Other places were only slightly bigger – costs cut by small, crammed tables with no linen, and probably some bought-in prepared foods.

Yet one visit made me a regular at Vins et Terroirs (competitively-priced at 12€ for two-course lunch, 18€ dinner), and I went eight or nine times. You can’t beat fast and friendly waiters under exposed beams and an ingrained spirit of gastronomie. A lentil soup with egg stood out. One night a missing dish was replaced by foie gras (so I ordered the missing dish a couple more times). Even a toughish steak seemed apt, and they assured me the profiteroles were made in-house in small batches – the chocolate sauce seemed real, too.

Opposite the St Germain covered market, Le Petit Vatel was even more cramped, and a tad more expensive with dishes at a proportionately higher level. The simple boudin noir with a little apple … missing it already.

On the way there, we could check out the lunch queue at the smart Comptoir du Relais (either queue, or get there early or late). Couldn’t resist a second shot at their lobster bisque (not thick, and I recall tomato hidden in there somewhere). 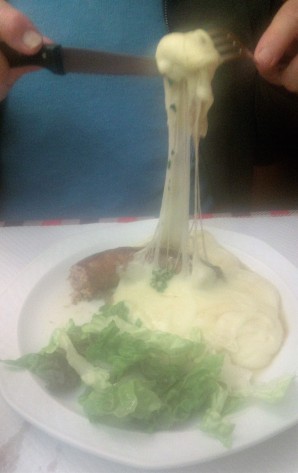 Back closer, and named after an uninhabited, war-ravaged island off Brittany, Cézembre is new, compact and excellent value for high quality, contemporary food (fixed menu of five dishes for 45€, plus 25€ for three matching glasses of wine), even if I couldn’t resist feeling that the overall effect was of comfort food with foam. On tripadvisor, Cézembre rates #14 out of 13,742 restaurants in Paris, so bookings will get harder.

The restaurant has just one young waiter, who also runs the dishwasher, and two in the kitchen, so not a quick night. I heard that the original intention had been to open in Australia, and the waiter looks forward to surfing again at Byron Bay.

A city this size and so densely cultured has innumerable “secrets”, even still in the Marais. Those hazy photos above… that’s a sausage with aligot, approximately two parts potato to one part cheese. We’ve been to Roland and Josette’s many times, although only managed twice this stay – a dream of a small bar with its clutch of long-term, bohemian habitues, leading into an even smaller dining room. It’s hardly mentioned on tripadvisor, and one French complaint is that it’s a survivor of the 1950s (a complaint!). To give away the address, true gourmands, it’s Le Bougnat (the “Le” avoids confusion with another place).

Nearly 40 years ago, I dined Chez Allard, a then one-star bistro founded in 1932. Monsieur Allard (by then, the son, André) recommended sharing the frogs’ legs, because they were the real burgundian ones, and recommended against their famous specialty of duck and olives, because duck and turnips were briefly in season. Just accept our carafe red, he reassured. I probably had profiteroles. And the meal in a then near-empty bistro was magnificent, the duck among the best things I’ve ever eaten.

Allard was so close to our studio this trip that we almost shared a wall. Accordingly, we popped around the corner to catch up  with duck and olives (the dinner was a gift, gratefully received!).

The bistro has been done over in a respectful renovation by Alain Ducasse’s team. The recent switch from Laetitia Rouabah to Fanny Herpin as chef has maintained the tradition of a woman in the kitchen – originally Marthe, and her daughter-in-law Fernande Allard on my original visit. Because the door was often left open on to the kitchen, we can confirm that the young chef and/or her offsiders were hard a work every day from early morning until early morning.

The menu retains many old favourites. I started humbly, but well, with Frisée jaune aux beaux lardons et croûtons (curly endive with lardons). Marion liked the oeufs cocotte so much that she ordered them again when we returned for lunch. M. Allard was right about his wife’s duck and turnips (and I again thank them). Although the effect of the olives was different, the sauce was reminiscent, and one of the lively young waiters (immediately picked him as Italian) proudly revealed the green olives were Sicilian.

Still tightly packed, and with a predictable menu, this bourgeois bistro showed the benefits of paying more for table linen, attentive service, no kitchen short-cuts, and warm bath for the profiteroles chocolate.

This was the not-so-cheap, but really-near version of this trip’s search for the tiny “secrets” in which Paris abounds. The city might be losing favour on those near-ridiculous “world’s 50 best” lists, but dining density remains high.

Previously, I have enjoyed looking for the way ahead (the new/the exciting/the “best”). But there’s nothing like lost locales.