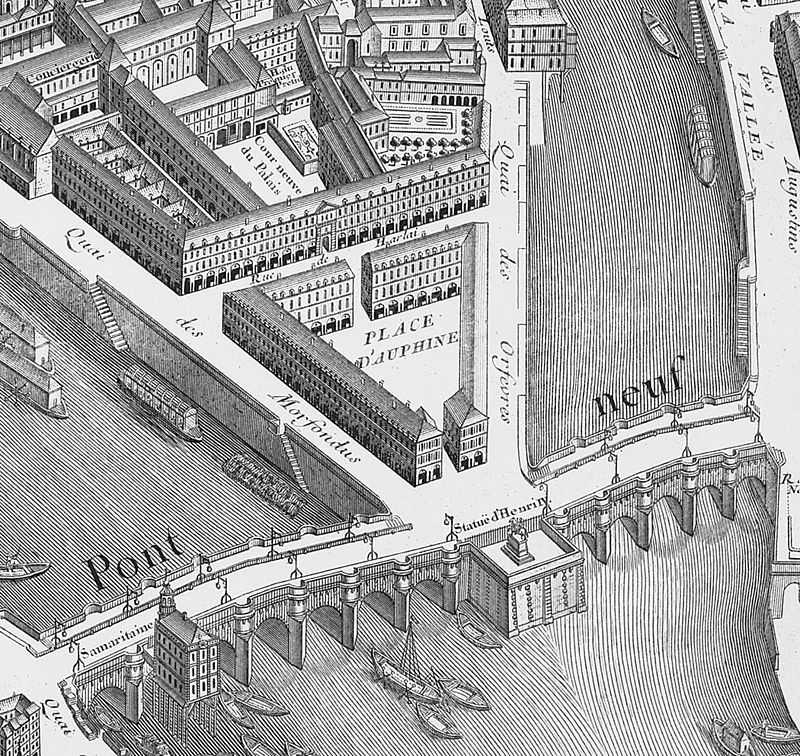 Have I told you about my introduction to Paris? This was probably in late-summer 1973. Whatever the exact date, it was a warm night. I’d been anxious on the Channel ferry, on the trains and in the Metro, where my jitters were worsened by my first submersion in a foreign language. I came up at the Cité stop, walked around the corner, found my former journalist colleague, who showed me my couch under the apartment window, which I opened to the summer evening in the Place Dauphine.

The sound of that (triangular) square will never leave me. Even in the middle of a cooler day, forty-something years later, it remains enchanting. Away from the traffic, the buildings somehow gently echo care and delight. On that night, people dined outside three or four restaurants in the square, so that I heard through the trees cutlery, wineglasses and conversations.

Ever since that epiphany, I have paid attention to the sounds of dining – and taken restaurants even more seriously. I have generally opposed piped music. When I put on a recording at home, it’s as if to fill in for missing tables. Admittedly, I can almost accept a restaurateur intruding music until two or three tables have made it a restaurant.

The other day, I was almost the only diner in Zorba restaurant, which was all done out in blue and white, and I must admit to enjoying the only slightly Eurovisionised version of Theodorakis (his exiled group’s Sydney concert is another treasured memory). Greek songs have a longing for home, almost reflected in yesterday’s plates.

Back forty-or-so years, no Paris restaurant piped any music, and the best ones still don’t. Marking the Alpine crossing to Italy, restaurants would either have the television full-blast, or nothing.

Probably even before I got to Europe, at an Italian place on Parramatta Road, the level increased steadily as everyone shouted louder to be heard. The waiter would whistle shrilly, silencing everyone, until the level rose again. These days, some Sydney places seem popular not despite, but because of, rowdiness. Restaurant reviewers already warn about deafening places, but there is more to be said.

Not that getting the noise-level right is easy. Our restaurant in the Adelaide Hills could get too noisy, so that after adding to couple of quilts to the walls, architect friend Stefan suggested lining underneath a central serving table with egg-cartons. It helped, except that the cat clawed them down (that’s another story). At its best, the dining room enjoyed a gentle hum.

Increasingly, one pays for the ability to talk. Or one sits outside. As well as the Place Dauphine, and then Ma Bourgogne in the then much emptier Place des Vosges, I have dined in the open-air in Rome, Siena and Todi, and under Bolognese porticos (they have nearly 40 kms of them). One year, I estimated we dined more than 200 times out on the terrace of our present home.

As fast as Paris restaurants have banished cigarettes (putting too many chefs on display in the street, smoking), some have introduced mood music.

At least the modest ones we’ve been mainly getting to tend to be quite crammed. That means crammed not just with people but also exposed rafters, stairs, and accumulated decor. No need for extra soundproofing. The tables tend to be small, so no need to shout, and I haven’t noticed any big, rowdy tables. The tightness makes for efficient waiting, a few steps and they’ve delivered, picked up, and taken an order. And doesn’t require added audio.

I just loved the sound at lunch recently, more a murmur. I was alone, facing towards the door, at a small table at which I had already become a regular (well, twice by then), and so I listened. Discreet conversations, almost entirely in French. Lunch on the street at Comptoir du Relais got a bit cold, and the banging from building work diagonally opposite took from the meal.

3 thoughts on “The sound of dining”