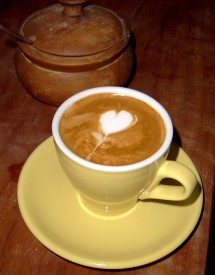 I leave Wellington for five years, the flat white adjusts, and I’m not convinced it’s for the better.

In late 2011, I extolled the flat white as the Antipodes’ greatest contribution to world gastronomy.

As Australians living in New Zealand for seven years, we found milk coffee, perfected – blending the best of both textured milk and espresso.

But, with change the only constant, on last month’s trip back to Wellington, flat whites seemed disconcertingly inconsistent, and certainly no longer typically in the distinctive, tulip cup.

I should quickly report excellent versions at Lamason Brew Bar, and one day we even had the dream-team – Dave Lamason and Dan Minson – at the machine together. Paul Schrader retained the tulip cup at the eternally-wonderful Nikau Cafe. And our daughter had an excellent barista lesson from Longe Nguyen.

Inconsistency might have come from complacency, because I don’t think I’ve overly romanticised the scene five or so years ago (or perhaps my home-barista skills have improved?). However, at least for changing the cups, we might try blaming Jeff Kennedy. After he sold his L’Affare coffee business, he launched Acme coffee cups in 2011. These filled a gap left when Italian firm ACF went out of business, along with their pastel colours.

Within two years, Acme (made in China) cups dominated New Zealand cafes and moved into Australia, US, UK and elsewhere. The thicker, lighter, larger-handled cup shapes include a tulip, but that is now deemed a “long black” cup, with flat whites shifted into the wider, straighter-sided shape (left). At least the volume remains the same (around 150 ml).

At the risk of sounding stuck-in-the-mud, novelty can be over-done. Some things are classics, requiring only ever mere tweaking. We need some comfortable predictability to the day, especially with our coffees. Our “conservative” tastes mean we often want the same drink we’ve grown up with.

In a complicated world, I have to admit that flat white coffees earlier benefited from change. New Zealand took world leadership in espresso-making when it still lacked an entrenched coffee culture in the 1990s. The new roasters searched the world for the best, and improved on it, especially the Australian flat white. Meanwhile, the long-established coffee cultures of France and the U.S. are only slowly admitting improvements, including flat whites.

Change or no change? Predictability or novelty? Comfort or disruption? Nothing like being unsettled by a transmogrified flat white to bring sobriety – as a smart pair warned in 1848:

Constant revolutionising of production, uninterrupted disturbance of all social conditions, everlasting uncertainty and agitation distinguish the bourgeois epoch from all earlier ones … All that is solid melts into air, all that is holy is profaned, and man is at last compelled to face with sober senses his real conditions of life, and his relations with his kind.

To interpret: an excellent cup of coffee reminds that, just as conservationists are the new conservatives, neoliberals preach eternal disruption.

That’s their word – “disruption”. The new Australian plutocrat Prime Minister, Malcolm Turnbull, whose wealth multiplies in a Cayman haven, carries on about disruption as “our friend”. We must embrace our “disruptive environment”.

Turnbull is hailed for replacing Tony Abbott’s three-word slogans, getting them down to one in this case. But the problem all along has been the ideology.

In his first speech as Prime Minister in September, even before he had got his certificate from the Queen’s representative, Turnbull committed his government to “freedom, the individual and the market”. A foodie welcomes choices, healthy bodies, and laden market benches, but Turnbull meant no such things.

His three ideals explicitly reaffirmed the neoliberal agenda: freedom at the expense of equality; the individual against the collective; and the market to replace democracy.

I feel unhappier with the system, and less welcoming of disruption, as the years go by. But I can always make a true, consoling cup …

One thought on “The flat white in an age of disruption”