ONCE, WHEN WE WERE DINING OUT in Sydney’s Leichhardt in the late 1960s, the noise became so unbearable that the Italian waiter whistled shrilly, everyone quietened, and then we gradually talked louder to be heard, until he whistled again.

That’s changed, because many restaurateurs now unapologetically drown out conversation. No longer young and silly, and with hearing aids, I have in recent years shied away from at least two restaurants as soon we felt the racket, and I have also put up with the noise in more than one highly-fashionable place where I’m not keen to return.

Discriminating among voices becomes harder with age (too much rock n roll when young). But now speakers thump imperiously beneath the clamour. Managements seemingly welcome the “Lombard effect” (people speaking louder to be heard). They must mistake deafening exuberance for buzz.

Certainly, several waiters have obligingly reduced the volume. Yet in Summer Hill, a young woman turned the sound down, only for the manager to turn it up. When we explained that we’d asked for it down, he said something inaudible about other customers (there were only one or two other tables). He then devoted himself to shifting around paper packages awaiting meal deliverers. Without soliciting our order, he remained unconcerned as we departed, and discovered a cheaper, much friendlier take-away around the corner, with a few tables and wine glasses.

The truth is, I love them. Not all of them, not all the time. I enjoy more than a few quiet restaurants, too, where you can concentrate on the food and the conversation without auditory distractions. But so many of the places I enjoy most tend to be at least somewhat noisy.

His illustrator did not seem so keen… 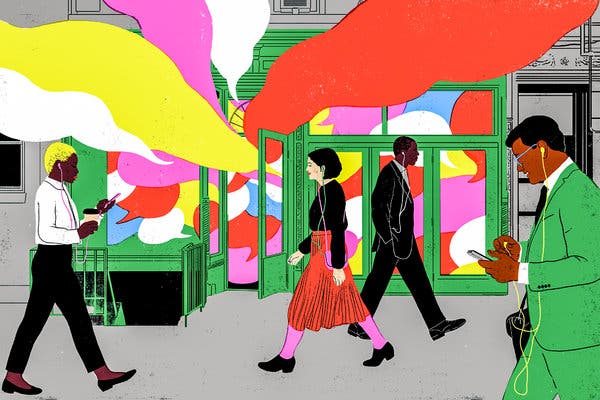 In a study of reviews in the New York Times and San Francisco Chronicle, researcher John Lang found that restaurant noise could affect the critics’ evaluations. Strikingly, the correlation between comments on noise and overall rating was reversed between east and west coasts:

The quality of food had double the impact of service on overall rating, followed by “atmosphere”, while noise remained a lesser, but still “significant predictor of the overall restaurant star rating”.

The Zagat “State of American Dining” report in 2016 had already found that, for 25% of customers, noise was the most irritating component of dining out, and the internet abounds with complaints. Various apps – including iHEARu and soundprint – been launched to share information about the noise levels of particular restaurants.

So why raise the volume? Researchers found that tasters rated beer more highly when listening to music by a familiar band.

A pair of professors of marketing, studying restaurant “servicescapes”, have identified the “environmental cues” such as lighting and music that “strongly” influence eating behavior. For example, loud noise and bright lighting increase the quantity eaten, and decrease the pleasure, without an overall effect on the money spent. They also found that “softening the lighting and music led people to eat less, to rate the food as more enjoyable, and to spend just as much”.

Acoustic engineers around the world, including at Flinders University, have advised of how to mitigate the effects of minimalist, hard surfaces.

Noise could become a problem for us at the Uraidla Aristologist in the Adelaide Hills (and so could curmudgeonly customers, but let that pass). A shouty table of six or eight could ruin it for everyone. After we had added a kilim and tapestry to the walls, a further, smart suggestion was to fix egg cartons underneath the long, central serving table. Confession: our notorious cat clawed them down.

Certainly, near-silence could be embarrassing for, say, just two tables of two. But we never succumbed to the increasing pressure to add “atmosphere” with any recorded music. Instead, we often achieved the beautiful hum and clink of contented conversation and dining – one pleasure I still miss.

Surroundings are enormously important to dining. Big money is spent on chairs, walls,  bars, benches and lights. Restaurants run from closeted haute cuisine to blaring television echoing around hard surfaces on the other side of the Alps. In recent times, some owners have chosen to deafen customers, and some have chosen to stay away.

With the pandemic, crowding gave way to muffling masks, social distancing, and outdoor tables. But then the clamour came crashing back. Restaurant reviewers ought to include a noise indicator.