VISUALLY, MY BOOK OPENS and closes with murals. The cover borrows the “Wall Street Banquet” of Mexican muralist, Diego Rivera, and the back flap author photo was taken in a restaurant in Germany. I suppose it’s a coincidence that the book is walled-in, so to speak, although there’s something about murals …

Rivera’s “Banquet” is part of a huge set in Mexico City, covering three floors and staircase of the Ministry of Public Education building, taking Diego and his team six years to finish. That was in 1928-29, as Wall Street crashed.

In this panel, eight diners share champagne, while being served ticker-tape streaming the latest stock market prices from the golden machine under a glass dome. Behind that is a bank vault with megaphones. A Statue of Liberty lamp balances on the table in the foreground.

At least some of the well-dressed guests are historical figures, including a Rockefeller, whose family would commission Rivera, who was an on-and-off-again communist, to work in the U.S. Inevitably, in 1934, the family instructed labourers to scrub out his most ambitious American piece, a huge mural in the foyer of The Rockefeller Centre, New York.

Meals Matter might almost equally have been illustrated by a nearby  mural in the Mexico series – “The dinner of the capitalists”, which shows a ruling family served coins, with revolutionaries with abundant food in the background.

Both murals belong to the building’s third level, which illustrates the “Ballad of the proletarian revolution”. Over the Wall St banquet, the banner translates as: “the rich man keeps thinking how to double his money.” The words over the capitalists’ dinner say: “Gold is worth nothing if there is no food”.

I came across Rivera’s murals when idly searching for an illustration of banquets, whose interpretation is important in Meals Matter. (I ended up with a photo of an electric chandelier in Glasgow!) The Wall St version is not strictly a banquet; in this case, “banquet” connotes privilege. 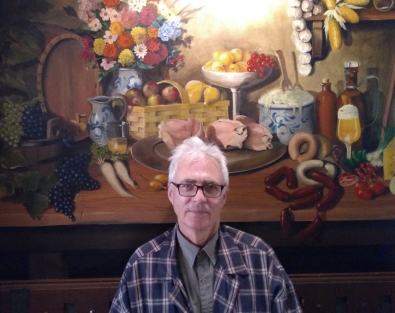 The back flap author photo was taken in mid-2019 by my wife, Marion Maddox, in Hannover, Germany. She took out the phone at the Max Walloschke restaurant, where we went several times. Our revisits explain the two versions (shown here) in different clothes in front of different still lives.

Max Walloschke, who was a weightlifter, professional wrestler and German bowls champion, opened the Kneipe (“pub”) on 19 June, 1952. 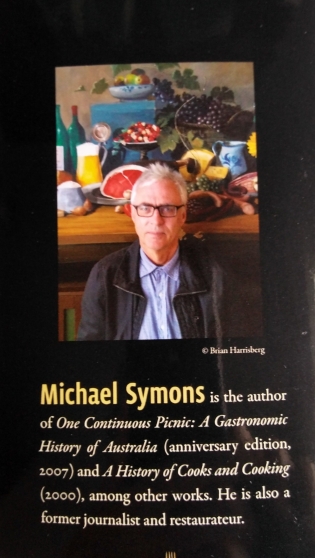 In Berlin, I suspected that smart locals crowded old-time Austrian restaurants, because they could not admit to enthusing about what some might call “heavy German kitsch”.

However, Max Walloschke remains unapologetic, calling itself “Das Kultrestaurant am Steintor” – the “cult restaurant at the Steintor”, that is, the place with a dedicated following at the city’s old “stone gate”.

The restaurant’s official slogan, “Gutbürgerliche Küche und gemütliches Ambiente seit 1952“, uses two words that are allegedly untranslatable. “Gutbürgerliche” suggests “homely” in the sense of lots of sausages, potatoes, and beer. And “gemütlich” hints at a “cosy” atmosphere, and more, because: “Cosy captures an element of it but crucially lacks those of friendliness and belonging.”

The restaurant also boasts “authenticity” and “tradition”, which we can believe, and “Herzlichkeit” (“warmth”), which we can confirm. (I plan to say more on this.)

As immoveable artworks, genuine murals (rather than wallpapers) have tended to be sponsored for public places, including cafes and restaurants, where they often employ faux architectural elements to give the illusion of grandeur, space or being in the homeland – sometimes all at once, such as a panorama of the Bay of Naples through trompe-l’oeil pillars. The more Gutbürgerlich murals of beer, pork and vegetables encourage Gemütlichkeit.

I must find out the name of the painter, whose food murals contribute so warmly to Max Walloschke’s welcome.