A holiday (or holy-day) reveals what a people finds, or is expected to find, sacred. So, Australia officially celebrates such things as the birth and death of a religious leader, the nominal birthday of the highest political figure, workers’ success in reducing hours, horse races – that sort of thing.

We’ve just had Anzac Day, which celebrates war over peace. And today is our Mother’s Day, and in other countries that follow the U.S. lead, and an automatic holiday, because “the second Sunday in May” is a God-given holiday.

Can you already see the core dilemma of our times? – commercialism as the new sacred. As in no long paying workers a bonus for working on traditional holy-days. As in interest groups promoting their trade, charity or political cause through “days”, “weeks” and, in the case of the United Nations, “years”.

The supermarket chain calling themselves the “Fresh Food People” recently marketed the claim that dead soldiers were “fresh” in our memories. Incredibly, no-one in Woolworths knew it is illegal to use “Anzac” (Australian and New Zealand Army Corps) for commercial purposes – no selling even of “Anzac biscuits”. (The corporation appears then to have spread a rumour that its campaigns are run from London.)

My interest in holidays started with the oddity of how we, in the southern hemisphere, celebrate Christmas and Easter wrongly by six months – such feasts originally marked the seasons, before calendars. 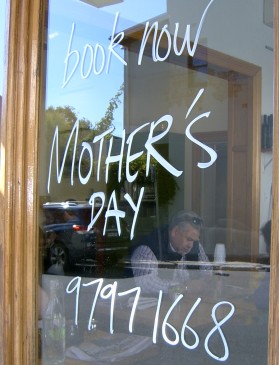 I’ve only now paid much attention to Mother’s Day, other than both decrying its commercialisation, while knowing our restaurant would be full that day. I hadn’t realised it was such an ethical, political, festival monster. Motherhood – sacred, and an even more sacred marketing opportunity.

It’s perfect blackmail – if you don’t celebrate (i.e., pay up), you don’t love your mother.

One less-commercial answer is not to buy cards, gifts, flowers and restaurant meals by relieving mother of the cooking for the day. But why only on that day – aren’t women liberated?

So what I have just learned? Firstly, an invaluable resource indicates where to place the apostrophe (and we are interested in apostrophes). Apparently, in trademarking the phrases “Mother’s Day” and “second Sunday in May” in 1912, Anna Jarvis declared:

“Mother’s” should be a singular possessive, for each family to honor its mother, not a plural possessive commemorating all mothers of the world.

But was Anna Jarvis (borrowed photo at the top) even the founder of Mother’s Day? Some quick research reveals that its invention is as confused as any other.

Let me explain origin myths. My researches (along with Helen Leach and others) have found that named cakes and biscuits almost invariably come with competing stories, none of which is exactly correct. It’s even impossible to declare definitively whether the Pavlova was invented in Australia or New Zealand. That’s the sacred national dish for both of us (and so let’s both declare Pavlova Day!)

What happens is that they are social inventions, by many hands, but through social construction, people endow the apparent solidity of a distinct concept that therefore must have a definite inventor. Or so it seems. To read more, check out my papers, “The confection of a nation” and “The cleverness of the whole number” – available through here or here.

The web tells all kinds of origin myths about today’s “Hallmark holiday”, including Anna Jarvis’s struggles against florists’ exploitation of her mother’s favourite flower, a white carnation. It’s said she devoted all her money to that second campaign, only to have the florist industry secretly pay her nursing home bills, such was their gratitude for having exploited her story.

We might suspect that’s another florists’ myth. Nonetheless, accredited scholars have interesting stuff to say. Not that they agree.

Apparently, social activist Julia Ward Howe’s Appeal to womanhood throughout the world (later known as Mother’s Day Proclamation) called on women to unite for peace. Written in 1870, Howe’s was a pacifist reaction to the carnage of the American Civil War and the Franco-Prussian War. It was also a feminist push at the political level. In 1872, Howe unsuccessfully sought government backing for a “Mother’s Day for Peace” on 2 June every year.

And Wikipedia claims: “The modern Mother’s Day is an unrelated celebration and it was established by Anna Jarvis years later.”

That is probably incorrect, contradicted by Katharine Lane Antolini in Memorializing Motherhood: Anna Jarvis and the Struggle for Control of Mother’s Day, 2014.

The encyclopaedia for our times is relying on an earlier book, Leigh Eric Schmidt’s Consumer Rites: The Buying and Selling of American Holidays, 1995. Despite (or because of) doing much research into Jarvis, he failed to find any association between the pacifist Mother’s Days and her version. And yet Schmidt knew that Anna Jarvis set out to honour a mother who would appear to have been a pacifist, involved with the earlier version, and organising “special rituals of reconciliation after the Civil War”. These Mothers’ Friendship celebrations brought together neighbours on the border regions, which the Civil War had split.

Schmidt makes much of Anna Jarvis’ insistence that “Mother’s Day celebrations … were founded by me”. Yet she had to defend her holy day from appropriation from not just religious and political interests, but also commercial, as Schmidt shows so well. His earlier paper, “The commercialization of the calendar”, concentrates on Mother’s Day, and is worth reading.

When after a long illness her mother died on May 9, 1905, Jarvis was devastated. In another irony, Jarvis was saddened that her mother’s hopes to have a college education had been thwarted by “home responsibilities”, and her “pleasure and ambitions … restrained by the ties of motherhood”.

The American calendar, Anna Jarvis insisted, was permeated by patriarchy:

New Year’s Day is for “Old Father Time”, Washington’s Birthday is for “The Father of his Country”. … Memorial Day is for Departed Fathers. Independence Day is for Patriot Fathers…. Thanksgiving Day is for Pilgrim Fathers.”

The trade newspapers – Florists’ Review, American Florist, Horticulture and Florists’ Exchange – all noted the day’s first year of observance in 1908. The Florists’ Review carried a letter: “It’s a sentiment that appeals to every man and boy, and people bought flowers that never bought before. … We hope to make it a holiday for the United States. Crowd it and push it … and [it] comes when flowers are cheap and plenty.”

In April 1910, the Florists’ Review reminded: “Well, what have you started to help along Mothers’ day? Seen the mayor abou 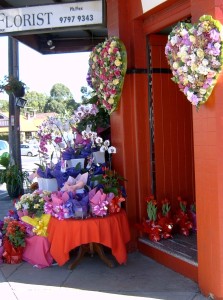 t issuing a proclamation? Called the ministers’ attention? Spoken to the local newspapers?”

The trade saw the story of Anna Jarvis’s love for her self-sacrificing mother as “more publicity for Mother’s Day than money can buy.” Discussing advertising strategies for Mother’s Day in 1916, the American Florist advised: “The commercial aspect is at all times to be kept concealed.”

By 1920, Jarvis turned against her former allies, now denouncing the “charlatans, bandits, pirates, racketeers, kidnappers and other termites that would undermine with their greed one of the finest, noblest, truest Movements and celebrations known”.

In 1922, the Florists’ Review pronounced Jarvis’s campaign against the trade foiled for another year: “Miss Jarvis was completely squelched!” Her “vaporings” against commercialization had actually increased publicity for Mother’s Day. Even better, controversy was free.

Already in 1913 the Florists’ Review had blustered: “Mothers’ day is ours; we made it; we made it practically unaided and alone.” As Schmidt concluded:

Anna Jarvis devoted a great part of her life to building up what she called the “Mother’s Day Movement,” but she wound up spending an equal share of it bewailing “the mire of commercialism” into which her sentimental and religious occasion progressively sank.

Mind you, I admit that, when separated by distance from a meal with my mother, I have been involved in sending flowers.

Nonetheless, who will join me in the Meals Matter Movement – launching something for all seasons in all hemispheres? Let’s celebrate Private Meals Day.