Just made a flat white. That flat white, there. Not my best example, but nonetheless good, because a flat white is the world’s best milk coffee. It uses the coffee well, profits from velvety milk, and balances the two to perfection. That’s if well made. I notice that global chains are now doing flat whites. The way you’d know if it were a proper flat white is that it would be a whole new experience – clearly superior to any other milk coffee. I’ve made them for people who respond: “I didn’t think I’d notice”. Others are persuaded to at least try them before adding sugar, and then don’t. I’ll provide a few notes on the making below. I became a world expert in flat whites through historical circumstances. In 2000, we moved from Adelaide (South Australia) to Wellington (New Zealand) – a wonderful city on a harbour, with the world’s best milk coffee. Okay, I’ve just returned to writing this, and with a snap of the next FW for my wife.

See if I can improve my latte art before publishing this post. I can do better. A world expert, but my expertise is much less practical than historical, because the Wellington flat whites were such an obvious step up that I inquired why. Luckily, the co-founder of Supreme roasters, Chris Dillon, gave a paper on “The revolution in Wellington’s coffee culture” at a gastronomic symposium we organised there in 2001. After more research, I decided the Wellingtonians had taken up what Australians had named a “flat white” (in contrast to a “short black”, and not as milky as a caffe latte, and not fluffy like a cappuccino), and had perfected it. Ironically, the New Zealanders had benefited from a relative lack of post-war Italian immigration. While Australian Italians had developed espresso especially through the 1960s, the quality was not strong. By contrast, New Zealanders only really started espresso a decade before we got there, and deliberately learned from the rest of the world.

Inspired by a cafe in Vancouver, Canada, partners opened Midnight Espresso in Cuba Street in 1989 that, in turn, helped set off a creative coffee scene. As the country’s political and cultural capital, Wellington provided a keen and discerning public. Joining other roasters, Chris Dillon and partner Maggie Wells set out in 1993 to compete on quality. They soon took up the flat white from a new cafe owner, recently returned from Melbourne, and no doubt joined other contributors in transforming Australia’s flat white into the world’s best milk coffee. In January 2012, I hazarded in the Australian Financial Review Magazine (27 January) and Dominion Post (here) that:

The flat white should soon be recognised as the single greatest Antipodean contribution to world gastronomy – so long as it’s made the Wellington way.

I could make that claim because, on one hand, Australia had not contributed hugely to gastronomy (except such natural products as macadamias and kangaroo meat, and we got a highly influential symposium of gastronomy going as early as 1984), and, on the other, I happened to have gone on a flat white hunt through Italy, France, Denmark, Germany, England, Canada and the U.S. Pacific North-West. Milk coffee was surprisingly bad, although I finally understood in Italy how a cappuccino milk should be all fluff (and no chocolate sprinkle on top). French coffee has since shown considerable improvement, benefiting from the take-up of micro-filtered milk (rather than the standard U.H.T.-tasting, so-called fresh milk). Only the baristas in Portland Oregon really knew their coffee, and could duplicate a flat white as a double ristretto, only “wet” (unfluffy) foam. Starting somewhere around 2005, the world scene had been improving, too, as Antipodean baristas took the FW to London and New York, and then France. (Don’t tell Australians, but NZ baristas were also usefully infiltrating Australian cafes. When we got back to Sydney, I had to purchase my own machine. Things have improved.)

Starbucks started selling flat whites in the U.K. by early 2010, and I was silly enough to try one in London. They have just launched them in the U.S. (in March 2015). In a way, it was Starbucks’ second concession to Antipodean coffee culture – they had previously been forced to close a majority of their stores here, such was the relative espresso sophistication. One of life’s little thrills was walking out of Wynyard rail station in the Sydney CBD in 2008 to see workers taking down Starbucks signs at one of their very central, unprofitable shops. Analysing Starbucks’ almost total collapse in this country, an advertising person explained: “Unfortunately for Starbucks, what worked in the US was bitter, weak coffee augmented by huge quantities of milk and sweet flavoured syrups …For the Australian consumer, raised on a diet of real espresso, this was always going to be a tough sell.” At least by desperately advertising the drink, such chains make room for a customer’s revelatory experience provided by a real, preferably Wellington-experienced barista. 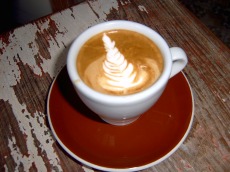 THE FLAT WHITE: A double shot of espresso, making around 30ml in a 160ml, usually tulip-shaped cup, topped with carefully “textured” or “stretched” milk (also known as “wet” or “micro-foam”, as opposed to “dry” or light, cappuccino foam), and at a hot but not burning temperature. The finishing latte art shows the New Zealand fern emblem or the similar rosetta elsewhere (I must photograph one; for the moment, another heart). Once you are getting the milk-coffee balance, the secret is attention to every step: high-quality arabica beans, not overly roasted, a week or so after roasting (and no more than a dozen days old), freshly ground; a clean machine, run for 25 to 30 seconds; starting with cold, full-cream milk in a small quantity (at most enough for three drinks); steaming that creates a vortex without bubbles; served immediately in a ce

ramic (never plastic or paper) cup. Espresso requires at least a domestic version of a professional machine. Mine is a “Rocket”, aka ECM Giotto. Grinding is crucial, too, in this case a Mazzer Mini.