GASTRONOMY is the diner’s sense of the world, and Meals Matter, the blog, provides a focus, through which Michael Symons brings together books, ideas, debates, news and observations.

Yet finding and sharing food and drink is the most imperative human activity, and economists thought so, too, until the rise of capitalism, which diverted attention to money. That suited corporations, but they don’t eat.

With the present crisis making the reworking of economic theory from the bottom-up even more timely, here are purchasing suggestions.

The book’s originality is why food anthropologist David Sutton, for example, generously locates the “potential to upend many orthodoxies”.

“A book I wish I had written”, writes former chef and now academic economist, Professor Ted P. Schmidt. The book succeeds “brilliantly in a radical project” for politics professor Janet Flammang. “Meals Matter is a passionate call to create a more convivial world,” according to professor of European history Bertram M. Gordon.  More reactions to the book. 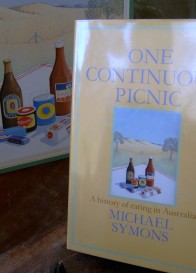 Here is the cover of my first work, One Continuous Picnic, a gastronomic history of Australia, which appeared in 1982, with an expanded edition in 2007. It was inspired by living for a year in a former watermill down an ancient Roman road near Radda-in-Chianti in Italy, and then setting up the Cantina di Toia restaurant in another Tuscan town, Bacchereto. The contrast with my own country was so sensual, important and revelatory that I researched that book, Jennifer Hillier and I ran the ground-breaking Uraidla Aristologist restaurant in the Adelaide Hills for 15 years, and I kept up gastronomical research, including completing a Ph.D.

Why do human beings cook? Who are our gastronomic heroes – that’s beyond Epicurus, Thomas Jefferson, Brillat-Savarin and M.F.K. Fisher? What’s the origin of the flat white? So many questions … while grateful for good food and company.

For blog essays, hit the Posts & Essays button (sometimes it’s above). To keep up with the latest, hit the Follow button (also, sometimes upper-right).

And to contact Michael Symons, email michael@mealsmatter.net, or fill in the form: