A FRIEND SAW THE MOVIE version of the Trip to Italy, together with some of Sydney’s top Italian restaurateurs, and all were disappointed. New Yorker reviewer David Denby joined an audience “apparently expecting a beach-and-mountain travelogue. For a hundred and ten minutes, watching some of the funniest comedy in years, they maintained a puzzled silence.” Not everyone loves The Trip (2010) and The Trip to Italy (2014), so I promised over dinner the other night to explain my delight.

These are the adventures of comedians Rob Brydon (Welsh) and Steve Coogan (northern English), as they chat in the car during a scenic drive, compete in mimicking movie stars over a restaurant meal, pose for a snap in front of a plaque for a poet whose lines they recite, get shown to their hotel room by a young woman, sometimes have a brief encounter, and talk on the phone to a partner, child or agent or themselves in a mirror.

Without having seen the movies, I suspect the six-part series, upon which the movies are based, are preferable not only because they are longer but also because, accented with music, the same ritual every episode lends a melancholy predictability. 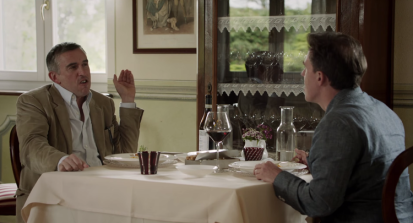 My wife happily tolerates my enthusiasm, but wonders if our divergent opinions might invite gender analysis. True, David Denby of the New Yorker asserts: “Both movies, in fact, are about the impossibility—and the necessity—of male friendship.” However definitive that might sound, he also applauds several other basic themes. The men reveal their attraction to younger women – receptionists or at a nearby cafe table – and agree that glances are now not so usually reciprocated. I also wonder whether two female comedians might yet be allowed to retain the same dignity, while being so frequently silly, and mean, but will wisely leave further such conjectures to others.

Both series show some of the world’s loveliest scenery (the Lakes District and nearby parts of England, and the west coast of Italy), finest restaurant food and smartest comic impersonations (Michael Caine, Sean Connery, Woody Allen and Hugh Grant being ones I recognise), but the series are not particularly about any of these, nor quotations from Wordsworth and Coleridge in England and Byron and Shelley in Italy, nor celebrations of the craft of comedy, nor conversations about fading professional careers, about aging and death. Amalgamating such components, the Trips are classics of apparent simplicity, exemplified by the addictive rhythm.

The viewer accepts immediately that Brydon and Coogan play clever caricatures of themselves (Coogan more on top – including longer hair – in the first series, and Brydon winning in the second), and that they are not really reviewing the restaurants for the Observer, but a third, highly creative force is also hiding behind them. Using the same actors, director Michael Winterbottom developed some of the same techniques in Tristram Shandy: A cock and bull story (2005), and he had already done a road movie, In This World (2002), depicting the harrowing “smuggling” of two Afghan refugees from Pakistan across the Middle East and Europe to Britain.

Presumably also contributing to the minimal plots, Winterbottom has spent much of his adult life making movies far from home, probably getting used to luxurious accommodation, so that his former wife, Sabrina Broadbent, wrote Descent: An irresistible tragicomedy of everyday life (2004) about a movie director, always away, having affairs with his female actors. The shows revel in ambiguity, with the glamour constantly subverted. The beautiful food, places and people are haunted by insults and interruptions, quarrels about driving, agents sounding hopeful, relationship troubles, and time passing. As Denby reports: “Both films pursue the high and the low: a complicated deep-running sadness courses through the cynical, sybaritic adventures.” Winterbottom has captured the Nigella Lawson lesson – behind every façade lies pain (the “domestic goddess” had everything, including a nasty, public split with wealthy advertising entrepreneur husband Charles Saatchi).

A dear friend used to finish her emails with the tagline: “Be kind, for everyone you meet is fighting a great battle”, probably the invention of Scottish pastor, Rev. John Watson (1850-1907). The shows’ downers might seem casual and never worse than hit-and-miss communication, rivalry, nagging doubts and work pressures, but time is always fleeing. The implicit lesson is: “Eat, drink and be merry, … ” and I plan to write further in defence of that philosophy.

For the moment, my argument is that the Trips witness the fundamental distinction between food and meals, and, at the risk of repetition, meals matter. Two or three brief shots from each kitchen show the cooks paying considerably more attention to the dishes than the two diners ever do. It is as if to say that celebrity chefs and photogenic plates have been accorded too much prominence of late.

As Brillat-Savarin wrote, table-pleasure depends not on fancy fare, but on four essentials: at least adequate setting, food and drink, companionship, and time. I’ll expand on this important point on another occasion, even if Brillat-Savarin gave two, differing lists of the four necessities (reconciled here). Nevertheless, Winterbottom has won me over by making the food and wine plainly important, but only one part of the picture. He has wondrously illustrated the peaks of all four necessary elements – glorious settings, fine comestibles, exceedingly witty and caring conversations, and apparently (only apparently) all the time in the world.

4 thoughts on “Comedians at dinner, or, Why I love Brydon, Coogan (and Winterbottom’s) Trip and Trip to Italy”